The Lion King and Hamlet

Scar and Claudius have more in common than Simba and Hamlet, mostly because they are both willing to murder to achieve victory, whereas Simba is much more merciful than Hamlet.  Scar, from the beginning of the film, clearly shows distaste and envy of his older brother; his first lines towards a rodent he has caught for lunch are “Life’s not fair is it? You see I-well, I…shall never be King. And you…shall never see light of another day” (Minkoff & Allers, 1994).  Scar’s opening lines are a deep foreshadowing of the upcoming plot and the reason why he decides to murder his own brother.  Claudius’s first words are “Though yet of Hamlet our dear brother’s death / The memory be green, and that is us befitted” (Shakespeare, trans. 1992, 1.2.1-2); both antagonists begin with the mentioning of a brother and “green” stated by Claudius can mean how he says it as if it were still new, but he could also mean “green” symbolizing envy, which is what Scar also feels for his brother; also, Scars’s eyes are also an eerie shade of green, a trait not found on any of the other characters in the film.

Later in the film Scar murders his brother, Mufasa, by throwing him into a stampede of wildebeests and Claudius murders his brother by poison poured in his ear while he sleeps.  Claudius states after his brother has died “That we with wisest sorrow think on him / Together with remembrance of ourselves” (Shakespeare, trans. 1992, 1.2.6-7); Scar also makes a similar statement when he is announcing his brother’s death (while saying Simba has died too) “…For me it is a deep personal loss.  So it is with a heavy heart that I assume the throne” (Minkoff & Allers, 1994).  Both brothers assume the throne after their siblings’ deaths; Claudius takes it a step further by marrying his sibling’s wife only a few months after the murder, while Scar sends the kingdom into ruin by allowing the hyenas to overfeed and not allowing the lionesses to follow the migrating herds. 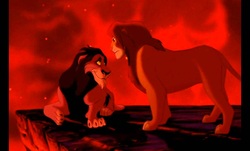 Claudius sends Hamlet to England to be executed after Hamlet creates chaos in the kingdom with a play telling the kingdom of how Claudius killed his father and then Hamlet follows by accidentally killing a man thinking it was Claudius.  When Claudius is killed, Hamlet kills him with a poison blade, representing the poison that killed his father, and is also forced to drink a goblet filled with poisoned liquid that killed his mother (accidentally).  Hamlet avenges his family the way his father would most likely have wanted it, by killing Claudius the same way he murdered them.  Scar does a similar tactic by making Simba believe it was the cub’s fault for Mufasa’s death and to avoid confrontation with the pride he should “run away and never return” (Minkoff &  Allers, 1994).  The climax of the film Scar reveals he was the one who killed Mufasa and Simba when confronted physically is able to throw Scar from the top of Pride Rock.  Though Simba did not kill Scar the exact same way Scar had killed Mufasa, he was still thrown from a cliff; if Simba killed Scar the exactly as Scar had killed his father, Simba would have been seen as a darker character and less merciful in the eyes of the audience.  Both antagonists are however discovered for their antics towards the ending of the works and pay the price for their actions in some way and both have fallen in the grace of their governed people.